I just saw the film Avatar last night with my 14-year-old son. Beautiful, and chock full with Science both good and bad. Sheril Kirschenbaum has a Discover Blog up about the Science of Avatar, which you can find: here.

Without spoiling the ending, I hope, I must say the ending was quite Hollywood, that is to say: unrealistic.

In any event, here are some nice pics (click on each for more detail): 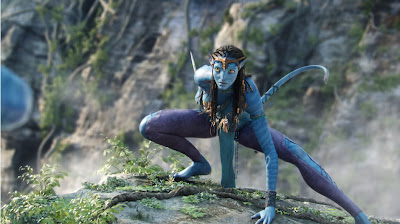 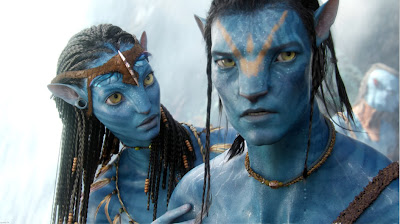 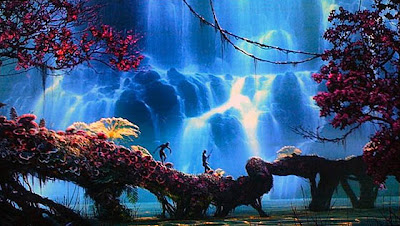 Questions for those who have seen the film:

What the heck is "the mineral" the Humans searching for? Some kind of "anti-gravity" stuff? Holy flubber! I guess that's how the mountains float, sheesh.

As I mentioned, I found the ending very Hollywood, i.e. very unrealistic, and without spoiling it doesn't it remind you, for those who have the pleasure of reading the novels, of Harry Harrison's "Deathworld" and Orson Scott Card's "Pastwatch: The Redemption of Christopher Columbus"?

I enjoyed the film, but it also reminded me of The English and The Spanish in the New World in the 1500's and 1600's, and the bulldozer vs  the tree bit reminded me of the animated film "Ferngully."

The artwork of the floating mountains reminds me of the artwork of Roger Dean, whose work graced the album covers of 1970's bands Yes, Asia, and Uriah Heep. The fauna, the creatures, seemed similar to those found in Wayne Douglas Barlowe's sci-fi artbook/"story": "Expedition: Being an Account in Words and Artwork of the 2358 A.D. Voyage to Darwin IV", as well, except on Pandora they have eyes.

But in the end, Avatar is a love story.

A love story, but I don't know a single guy who saw Titanic for THAT as much as watching the ship get destroyed.

It's a guy thing. Shrug.

Posted by Steven Colyer at 8:31 AM

Was he now? Cool. Then James Cameron is even more of a genius than I already thought he was. He definitely tapped the right guy in Barlowe. I'm very graphically orientated btw. I love Avatar very much, not just the graphics but the storyline as well. Cameron has a sixth sense for blending Romance (for the ladies, mostly) and Destruction (for us guys!). "Titanic" is another perfect example. The critics who damned his "character development" are crazy.

I like your blog very much and decided to follow it, keep up the cool work, Brian Stokes. Glad you saw Boston. Your Dad looks great and your nephew is adorable.

I've just recently decided to work the rest of my life in Nonlinear Dynamics ("Chaos" Theory, more accurately: Structure-in-Chaos Theory), which eventually will get into Computer Science, YOUR specialty, because without high-speed computers we don't have that field. I love equations too, but Nonlinear Differential Equations are tough as nails to solve for even our finest minds; yet Computers say don't worry mates, if an integral is the area under the curve, we have this algorithm that will provide a much faster solution to a close enough approximation for your purposes.

And that's cool too.