A Canticle for Leibowitz

49 years after it won the Hugo for Best Novel, this work by William Miller is still damned good. It's hard imaging there not belong a nuclear holocaust. We may well be living in the last generation of Science, for the next 1800 years ....

Welcome to the New Dark Ages, and have a nice day. 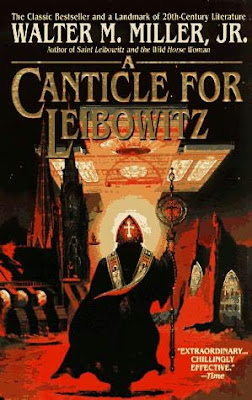 A Canticle for Leibowitz opens 600 years after 20th century civilization has been destroyed by a global nuclear war, known as the "Flame Deluge". The text reveals that as a result of the war there was a violent backlash against the culture of advanced knowledge and technology that had led to the development of nuclear weapons. During this backlash, called the "Simplification," anyone of learning, and eventually anyone who could even read, was likely to be killed by rampaging mobs, who proudly took on the name of "Simpletons". Illiteracy became almost universal, and books were destroyed en masse.

Isaac Edward Leibowitz had been a Jewish electrical engineer working for the United States military. Surviving the war, he converted to Roman Catholicism and founded a monastic order, the "Albertian Order of Leibowitz", dedicated to preserving knowledge by hiding books, smuggling them to safety (booklegging), memorizing, and copying them. The Order's abbey is located in the American southwestern desert, near the military base where Leibowitz had worked before the war, on an old road that may have been "a portion of the shortest route from the Great Salt Lake to Old El Paso." Leibowitz was eventually betrayed and martyred. Later beatified by the Roman Catholic Church, he became a candidate for sainthood.

Centuries after his death, the abbey is still preserving the "Memorabilia", the collected writings that have survived the Flame Deluge and the Simplification, in the hope that they will help future generations reclaim forgotten science.

The story is structured in three parts titled: "Fiat Homo", "Fiat Lux", and "Fiat Voluntas Tua". The parts are separated by periods of six centuries each.