Introduction to Logic- Shouldn't This Be Required Reading ? 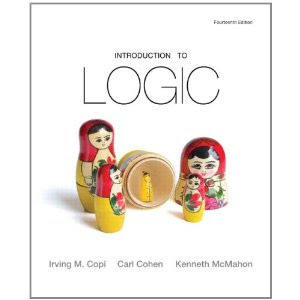 Both Mathematics and Physics grew from the most ancient intellectual field of Study, which is : Logic.

Logic became Philosophy, and then: Computer Science. If we are to save the world, we will need all three (Comp Sci, Math, Science).

Fortunately we live in an astounding age where we have all three , and in great measure, so I think we have a sporting chance of saving ourselves.

Assuming the bloody banks and politicians, our chief opponents and those most responsible for PROMOTING ignorance, don't kill us first. It's going to be, has been, and will likely continue to be, a fierce battle. Good luck to those who join me on my warrior's crusade so to speak on winning The War on Ignorance, and I salute all of you who are fighting it and been doing so longer than I've been alive.

Is is most likely a war without end. But it must be fought. LOSING ... is not an option.

In any event, I took Introduction to Logic as an elective in the 2nd semester of my freshman undergraduate year.

I wish the dang thing was a requirement for ALL college freshmen. It helped me oh so very much to understand all my Mathematics and Comp Sci and Science courses better. In short, it saved my life.

There are 3 physicists, alphabetically named Lee, Lubos, and Peter.
They live in 3 different countries: Canada, Czechia, and USA
They have 3 different views on String theory: One defends it, one exposes the hype, one seeks alternate solutions.

Connect the 3 men and their countries and views, using Logic.

So that's just one example, but from there things get more complicated and more important.

Why oh WHY isn't this course a requirement?

It would help everyone.

Philosophy and physics are not often thought of together in academia. While physicists develop calculations and models to describe the world around them, philosophers are more interested in the fuzzier questions of "why" behind it all. But Rutgers University philosophy professor Tim Maudlin thinks that the two disciplines are closer than most of us would realize.

"I think of philosophers who are interested in physics as addressing the traditional philosophical question, if you will, what exists in the particular case of the physical world," says Maudlin. "For example, you can worry about the mind/body problem and you can worry about the kind of existence minds have, which tends not to come up so much in physics. But just the issue of the nature of space and time, the nature of matter, the nature of physical law. All of these are recognizably philosophical questions that obviously depend upon understanding physics."

In his Big Think interview, Maudlin also talks about what the study of philosophy can reveal about the nature of physical reality, expressing surprise that many engineering students are content to come up with equations and formulas about the world around them without bothering to wonder what those figures actually mean. He also thinks that physicists should find it frustrating that quantum mechanics—a fundamental theory on which so much is based—isn't even really understood that well by the smartest minds in the field.

Maudlin also talks about the value of philosophical thinking in our daily lives, saying that while specific philosophical points may not pierce our everyday consciousness, the rigors of thinking methodologically, and questioning beliefs, can have great value. "I think the amount of belief that people hold for no good reason is distressing," says Maudlin. "And that the level of argumentation in our political life is abysmal. And the room for improvement, of clarity of thought of clarity of expression is almost unlimited. And if philosophy could help the world, it would be much more... instead of by having people adopt some philosophical doctrine about this or that, it would be to bring them a bit closer to the care and precision of thought that is characteristic, I think particularly characteristic of philosophical work."
Posted by Steven Colyer at 11:41 AM