Danica McKellar, 35, and mathematically gifted, has added value to Humanity by writing a series of books on Mathematics for young girls. So much for the sexist "Girls aren't good at Math or Science" bullcrap.

She played "Winnie" on the popular American television series: Wonder Years. For a whole generation, she was pretty much every young guy's first girlfriend.

Where oh where did the time fly? 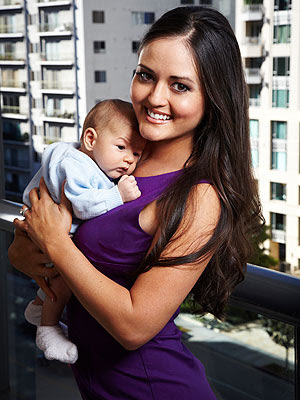 Anyway, what follows is a nice piece on her joy of first-time parenthood as well:

It took Danica McKellar a day and a half of natural labor to deliver her son Draco, but she barely recalls a moment of it.

“If I had known it was going to be 36 hours, I’m not sure I would’ve been able to do it,” says the former Wonder Years star, 35, who gave birth on Sept. 7 without an epidural.

“At the end I remember yelling, ‘Oh, come on!’ but besides that, I can’t remember what most of the labor was like!”

What she does remember clearly is meeting her son for the first time.

“There was so much joy in the room and so much relief!” she says. “It was instant love. It was an amazing, amazing evening.”


Since then, McKellar, her husband, composer Mike Verta, 38, and Draco have happily settled into their routine at home in Los Angeles. “Draco loves to listen to [his dad] play the piano,” she says. “I’m like, you don’t know that every daddy can’t do this!”

Her son’s name, which is the Latin word for dragon as well as a constellation, was her husband’s idea at first.

“He’d heard the name and loved it,” she explains. “He said, ‘Once we’re gone, the constellation will keep looking out for him.’ It makes me cry every time I hear it. So of course that made it a winner! I love it. It’s a cool, strong name.”

The author and actress has already lost 20 of the 40 lbs. she gained during pregnancy.

“I would crave whatever somebody was talking about!” McKellar laughingly recalls. “No matter what food it was. If somebody brought up lasagna, I would really want lasagna. Even liver and onions! It didn’t matter. All food sounded good. I was an omni-craver!”

As for her newborn son? “He’s really good-natured,” she says. “He likes getting his diaper changed. He seems to really appreciate that! And he has a ravenous appetite. He eats every three hours and I’m exclusively breastfeeding. He’s just really sweet.”