WELLINGTON (AFP) – An extraordinary underground observatory for subatomic particles has been completed in a huge cube of ice one kilometre on each side deep under the South Pole, researchers said.

Building the IceCube, the world's largest neutrino observatory, has taken a gruelling decade of work in the Antarctic tundra and will help scientists study space particles in the search for dark matter, invisible material that makes up most of the Universe's mass.

The observatory, located 1,400 metres underground near the US Amundsen-Scott South Pole Station, cost more than 270 million dollars, according to the US National Science Foundation (NSF).


Click image to see more of the Atlantic IceCube Observatory 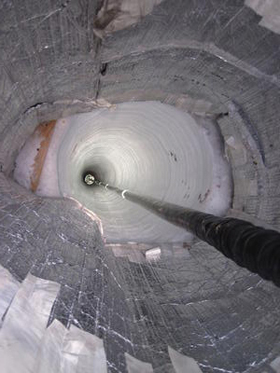 National Science Foundation
The cube is a network of 5,160 optical sensors, each about the size of a basketball, which have been suspended on cables in 86 holes bored into the ice with a specially-designed hot-water drill.

NSF said the final sensor was installed in the cube, which is one kilometre (0.62 miles) long in each direction, on December 18. Once in place they will be forever embedded in the permafrost as the drill holes fill with ice.

The point of the exercise is to study neutrinos, subatomic particles that travel at close to the speed of light but are so small they can pass through solid matter without colliding with any molecules.

Scientists believe neutrinos were first created during the Big Bang and are still generated by nuclear reactions in suns and when a dying star explodes, creating a supernova.

Trillions of them pass through the entire planet all the time without leaving a trace, but the IceCube seeks to detect the blue light emitted when an occasional neutrino crashes into an atom in the ice.

"Antarctic polar ice has turned out to be an ideal medium for detecting neutrinos," the NSF said in a statement announcing the project's completion.

"It is exceptionally pure, transparent and free of radioactivity."

Scientists have hailed the IceCube as a milestone for international research and say studying neutrinos will help them understand the origins of the Universe.

"From its vantage point at the end of the world, IceCube provides an innovative means to investigate the properties of fundamental particles that originate in some of the most spectacular phenomena in the Universe," NSF said.

Most of the IceCube's funding came from the NSF, with contributions from Germany, Belgium and Sweden.

It is operated by the University of Wisconsin-Madison.

From here
Posted by Steven Colyer at 8:01 PM