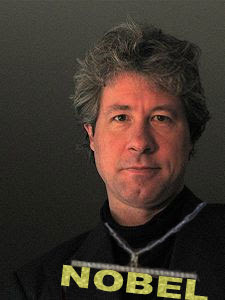 Abstract: The unification of gravity with the three other forces has been an important goal of physics for some time now, because a quantum theory of gravity is necessary to explain the universe at its earliest moments. Its pursuit has largely assumed gravity's independent existence, but E. Verlinde [pictured above] proposed that gravity is not a fundamental force but a macroscopic phenomenon that emerges as a result of thermodynamic principles applied to the information of mass distributions. Under this framework we consider the roles played by quantum microstates, entanglement, information theory, the AdS/CFT Correspondence, and String Theory in general. We also ask whether Verlinde's proposal suggests that action principles should be thermodynamic in nature.
Posted by Steven Colyer at 12:20 PM