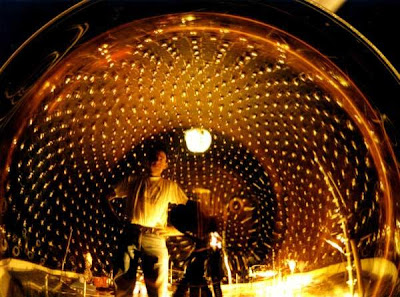 They're back at the top of the news again, and who's to say they won't stick around this time? Time to catch up.

A sterile neutrino is a hypothetical neutrino that does not interact via any of the fundamental interactions of the Standard Model except gravity.[note 1] It is a right-handed neutrino or a left-handed anti-neutrino.

Such a particle belongs to a singlet representation with respect to the strong interaction and the weak interaction and has zero weak hypercharge, zero weak isospin and zero electric charge. The left-handed anti-neutrino has a B-L of 1 and an X charge of 5. Sterile neutrinos would still interact via gravity, so if they are heavy enough, they could explain cold dark matter or warm dark matter. In some grand unification theories, such as SO(10), they also interact via gauge interactions which are extremely suppressed at ordinary energies because their gauge boson is extremely massive. They do not appear at all in some other GUTs, such as the Georgi-Glashow model (i.e. all its SU(5) charges or quantum numbers are zero).