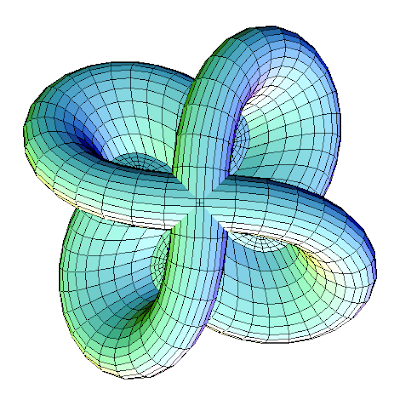 From Wikipedia, the free encyclopedia

Differential topology considers the properties and structures that require only a smooth structure on a manifold to be defined. Smooth manifolds are 'softer' than manifolds with extra geometric structures, which can act as obstructions to certain types of equivalences and deformations that exist in differential topology. For instance, volume and Riemannian curvature are invariants that can distinguish different geometric structures on the same smooth manifold—that is, one can smoothly "flatten out" certain manifolds, but it might require distorting the space and affecting the curvature or volume.

On the other hand, smooth manifolds are more rigid than the topological manifolds. John Milnor discovered that some spheres have more than one smooth structure -- see exotic sphere and Donaldson's theorem. Kervaire exhibited topological manifolds with no smooth structure at all. Some constructions of smooth manifold theory, such as the existence of tangent bundles, can be done in the topological setting with much more work, and others cannot.

One of the main topics in differential topology is the study of special kinds of smooth mappings between manifolds, namely immersions and submersions, and the intersections of submanifolds via transversality. More generally one is interested in properties and invariants of smooth manifolds which are carried over by diffeomorphisms, another special kind of smooth mapping. Morse theory is another branch of differential topology, in which topological information about a manifold is deduced from changes in the rank of the Jacobian of a function.

For more details on this topic, see geometry and topology.

Differential topology and differential geometry are first characterized by their similarity. They both study primarily the properties of differentiable manifolds, sometimes with a variety of structures imposed on them.

One major difference lies in the nature of the problems that each subject tries to address. In one view,[1] differential topology distinguishes itself from differential geometry by studying primarily those problems which are inherently global. Consider the example of a coffee cup and a donut (see this example). From the point of view of differential topology, the donut and the coffee cup are the same (in a sense). A differential topologist imagines that the donut is made out of a rubber sheet, and that the rubber sheet can be smoothly reshaped from its original configuration as a donut into a new configuration in the shape of a coffee cup without tearing the sheet or gluing bits of it together. This is an inherently global view, though, because there is no way for the differential topologist to tell whether the two objects are the same (in this sense) by looking at just a tiny (local) piece of either of them. She or he must have access to each entire (global) object.

From the point of view of differential geometry, the coffee cup and the donut are different because it is impossible to rotate the coffee cup in such a way that its configuration matches that of the donut. This is also a global way of thinking about the problem. But an important distinction is that the geometer doesn't need the entire object to decide this. By looking, for instance, at just a tiny piece of the handle, she or he can decide that the coffee cup is different from the donut because the handle is thinner (or more curved) than any piece of the donut.

More mathematically, for example, the problem of constructing a diffeomorphism between two manifolds of the same dimension is inherently global since locally two such manifolds are always diffeomorphic. Likewise, the problem of computing a quantity on a manifold which is invariant under differentiable mappings is inherently global, since any local invariant will be trivial in the sense that it is already exhibited in the topology of Rn. Moreover, differential topology does not restrict itself necessarily to the study of diffeomorphism. For example, symplectic topology — a subbranch of differential topology — studies global properties of symplectic manifolds. Differential geometry concerns itself with problems — which may be local or global — that always have some non-trivial local properties. Thus differential geometry may study differentiable manifolds equipped with a connection, a metric (which may be Riemannian, pseudo-Riemannian, or Finsler), a special sort of distribution (such as a CR structure), and so on. 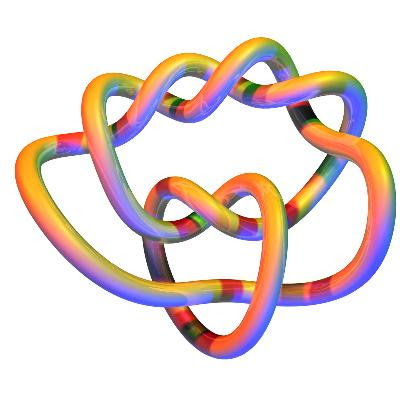 Pretzel from Peter Teichner's preprints page here.
Posted by Steven Colyer at 7:48 AM