‎"There are two novels that can change a bookish fourteen-year old's life: "The Lord of the Rings" and "Atlas Shrugged." One is a childish fantasy that often engenders a lifelong obsession with its unbelievable heroes, leading to an emotionally stunted, socially crippled adulthood, unable to deal with the real world. The other, of course, involves orcs." --Kung Fu Monkey (IMdB.com) 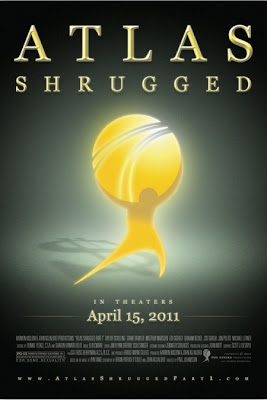 
Funny story. Two students, both future Nobel prize winners, in their undergrad days, on campus. One is reading "Atlas Shrugged." The other one approaches and sees that, grabs the book, rips out the last chapter, and hands it back. "There," he says. "Now it's a good book." :-)


The book, essentially, is very ANTI-Union, and very PRO-Management. I've studied Labor-Management relations in some detail (and been both worker and manager), and believe me there's plenty of Pros and Cons to each.


‎
From The Internet Movie Database webpage on the film:
Storyline

It was great to be alive, once, but the world was perishing. Factories were shutting down, transportation was grinding to a halt, graineries were empty--and key people who had once kept it running were disappearing all over the country. As the lights winked out and the cities went cold, nothing was left to anyone but misery. No one knew how to stop it, no one understood why it was happening - except one woman, the operating executive of a once mighty transcontinental railroad, who suspects the answer may rest with a remarkable invention and the man who created it - a man who once said he would stop the motor of the world. Everything now depends on finding him and discovering the answer to the question on the lips of everyone as they whisper it in fear: Who *is* John Galt?
Clip: Dagny Taggart Confronts the Union
Posted by Steven Colyer at 6:15 AM

The quote attributed to Kung Fu Monkey appears (with a very minor difference) on page 172 of "The Value of Nothing," by Raj Patel, 2009.

Truly? Thanks. What is the difference? I would change "involves orcs" to "involve Elves and Wizards, Hobbits and orcs", in an attempt to be less subtle.

I got that quote from a commenter in the replies section.

The Replies section. In anything. More comedy than a human has any right to. ;-)