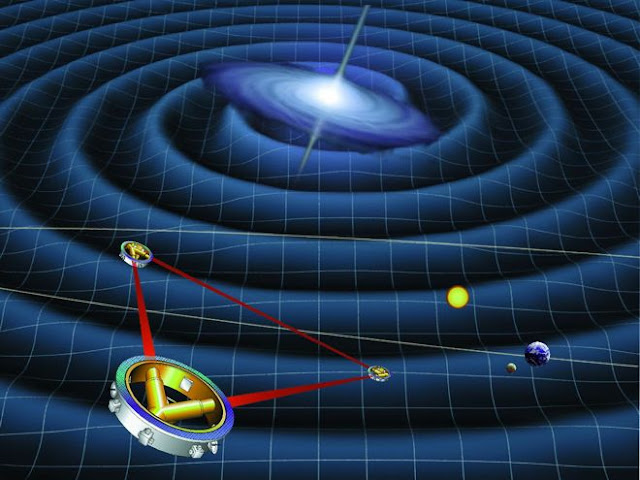 LISA died today. Kaput. Dead. Killed by NASA. Gone. Finito. What a frigging crime. It probably wasn't to go up in my lifetime, but she had promise.

Welcome to The Bush Economy, where everyone loses.

Except the Bushes of course. That's why they call it "The Bush Economy." Heh. And damn.

Better luck next parallel universe, because this one pretty much sucks.

The Laser Interferometer Space Antenna (LISA) is a planned space mission to detect and accurately measure gravitational waves from astronomical sources. LISA is a joint effort between the United States space agency NASA and the European Space Agency (ESA). LISA was recommended in the 2010 U.S. National Research Council decadal report on astronomy and astrophysics[1] as one of two large space missions to be implemented by NASA in the upcoming decade. The report recommends that LISA start in 2016, after a successful LISA Pathfinder flight and selection in the ESA Cosmic Vision program,[2] which would then enable launch in 2025.
LISA will be the first dedicated space-based gravitational-wave detector; it will measure gravitational waves by using laser interferometry to monitor the fluctuations in the relative distances between three spacecraft, arranged in an equilateral triangle with 5-million-kilometer arms, and flying along an Earth-like heliocentric orbit.[3] Passing gravitational waves create oscillations in the inter-spacecraft distances, as measured by light, in directions transverse to the direction of wave propagation. LISA will be sensitive to waves in the frequency band between 0.03 milliHertz to 100 milliHertz, including signals from massive black holes that merge at the center of galaxies, or that consume smaller compact objects; from binaries of compact stars in our Galaxy; and possibly from other sources of cosmological origin, such as the very early phase of the Big Bang, and speculative astrophysical objects like cosmic strings and domain boundaries.[4]
Posted by Steven Colyer at 7:05 PM