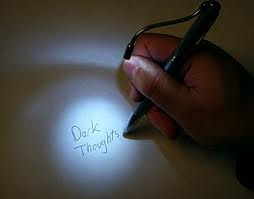 A common urban legend states that, faced with the fact that ball-point pens will not write in zero-gravity, NASA spent a large amount of money to develop a pen that would write in the conditions experienced during spaceflight (the result purportedly being the Fisher Space Pen), while the Soviet Union took the simpler (and cheaper) route of just using pencils.[1] This story is in fact false, as the development of the Fisher Space Pen was done independently of NASA, using private funds, and only sold to NASA (and the Soviet Union) after it was completed.
Russian cosmonauts used pencils, and grease pencils on plastic slates until also adopting a space pen in 1969 with a purchase of 100 units for use on all future missions.[2] NASA programs previously used pencils (for example a 1965 order of mechanical pencils[3]) but because of the danger that a broken-off pencil tip poses in zero gravity and the flammable nature of the wood present in pencils[3] a better solution was needed. NASA never approached Paul Fisher to develop a pen, nor did Fisher receive any government funding for the pen's development. Fisher invented it independently, and then asked NASA to try it. After the introduction of the AG7 Space Pen, both the American and Soviet (later Russian) space agencies adopted it.
From http://en.wikipedia.org/wiki/Space_Pen
Posted by Steven Colyer at 3:28 PM