In physics, a Bose–Einstein condensate is a state of matter that occurs in certain gases at very low temperatures. Any elementary particle, atom, or molecule, can be classified as one of two types: a boson or a fermion. For example, an electron is a Fermion, while a photon or a helium atom is a Boson. In quantum mechanics, the energy of a (bound) particle is limited to set of discrete values, called energy levels. An important characteristic of a Fermion is that it obeys the Pauli exclusion principle, which states that no two fermions may occupy the same energy level. Bosons, on the other hand, do not obey the exclusion principle, and any number can exist in the same energy level. As a result, at very low energies (or temperatures), a great majority of the Bosons in a Bose gas can be crowded into the lowest energy state, creating a Bose–Einstein condensate. 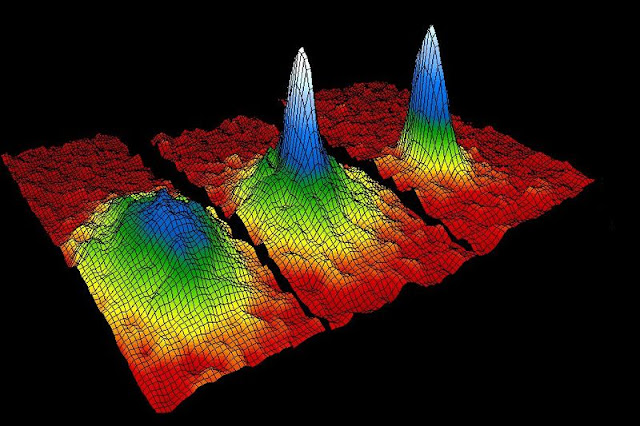 A Bose-Einstein condensate is therefore a quantum phenomenon characteristic of boson particles. Nevertheless, a similar type of condensation transition can occur also in off-equilibrium classical systems and in particular, complex networks. In this context, a condensation phenomenon occurs when a distribution of a large number of elements in a large number of element classes becomes degenerate, i.e. instead of having an even distribution of elements in the classes, one class (or a few classes) become occupied by a finite fraction of all the elements of the system.
Condensation transitions occur in traffic jams, where long queues of cars are found[1], in wealth distribution models[2] where a few people might have a finite fraction of all the wealth or in spin glass models[3]. However, the condensation transition in these models cannot in general be mapped to a Bose-Einstein condensation.
A network is characterized by a set of nodes or vertices and a set of links between these nodes. In mathematics, graph theory describes networks in general. The theory of random graphs deals in particular with stochastic networks (networks in which each link is present with a given probability p). A large class of networks that describe real complex systems like the Internet, the world wide web, airport networks or the biological networks of molecular interactions, are described by random networks. Network theory is a recent field of research which investigates methods of characterizing and modeling real complex networks. In particular it has been found that many complex networks have universal feature like the small world property and a scale-free degree distribution. The scale-free degree distribution of networks can be caused by the "preferential attachment" mechanism.[4]
In the late 1990s, Ginestra Bianconi was a graduate student, working with Prof. Albert-László Barabási, a noted network theorist.[4] At his request, she began investigating the fitness model, a model in which the network evolves with the "preferential attachment" mechanism but in addition, each node has an intrinsic quality or fitness that describe its ability to acquire new links. For example, in the world wide web each web page has a different content, in social networks different people might have different social skills, in airport networks each airport is connected to cities with unevenly distributed economic activity, etc. It was found that that under certain conditions, a single node could acquire most, if not all of the links in the network, resulting in the network analog of a Bose–Einstein condensate. In particular, a perfect analogy[5] could be drawn between the mathematics of the network and the mathematics of a Bose gas if each node in the network were thought of as an energy level, and each link as a particle. These results have implications for any real situation involving random graphs, including the world wide web, social networks, and financial markets.
Click here to see the rest of the article at wikipedia, including the cool equations, and yet another application of Mathematics into Physics.
Posted by Steven Colyer at 6:56 AM

Thank you, I didn't know, but I'm kind of new to this. Much appreciated.