The Mathematics Timeline - Part 3 and Complete 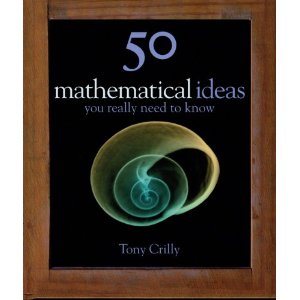 I reviewed UK Mathematics Historian Tony Crilly's 50 Mathematical Ideas You Really Need to Know in February ==> HERE. That is the first link and very important as it lists the 50 chapters, 4 pages each, of this wonderfully concise book.

In Part 1, I combined the little timelines in each chapter up though Chapter 14, up to and including Algebra. Numbers in parentheses are Chapter numbers, which is why I asked you to click on that first link, first. I also have introductory notes there.

This list seems long, and it is (prints out at 13+ pages), but it's useful, important, yet ... finite! :-) I shall be referring to this timeline in the coming months.

1950 BC - The Babylonians work with quadratic equations (14)

1750 BC - The Babylonians compile tables of square roots (4)

c. 500 BC - Fragmentary evidence exists for Pascal's triangle in Sanskrit (13)

c. 300 BC - The theory of the irrational numbers by Eudoxus is published in Book 5 of Euclid's Elements (4)

c. 300 BC - Euclid's Elements provides the model for mathematical proof (17)

c. 300 BC - Euclid includes the parallel postulate in his Elements (27)

200 BC - Chinese mathematicians use arrays of numbers (39)

100 - The Chinese devise a system for calculating with fractions (3)

c. 1070 - Omar Khayyam discovers Pascal's triangle, which in some countries is named after him (13)

1335 - Richard of Wallingford writes a groundbreaking treatise on Trigonometry (21)

1618 - John Napier encounters a constant, e, in connection with logarithms (6)

1639 - Girard Desargues introduces the concept of infinity into geometry (7)

1727 - Euler uses the notation e in connection with the theory of logarithms; it is sometimes called Euler's number (6)

1752 - Euler gives his formula for the number of vertices, edges and faces in a polyhedron (23)

1812 - Laplace publishes his essay on a deterministic world (26)

1831 - The travelling salesperson problem appears as a practical problem (46)

1837 - Simeon-Denis Poisson describes the distribution named after him (34)

1872 - Richard Dedekind sets out a theory of irrational numbers (4)

1873 - Brocard produces his exhaustive work on the triangle (21)

1881 - Michelson measures the speed of light with great accuracy (48)

1887 - The Lorenz transformations are first written down (48)

1892 - Fano discovers the Fano plane, the simplest example of a projective geometry (28)

1900 - Hilbert places Reimann's Hypothesis in his list of key problems for mathematicians to solve. It is Hilbert's personally favorite problem, and still unsolved as of 2011 (50)

1905 - Einstein publishes On the electrodynamics of moving bodies , the paper that describes special relativity (48)

1910 - Russell and Whitehead attempt to reduce mathematics to logic (16)

1915 - Einstein publishes The field equations for gravitation, his paper that describes the theory of general relativity, based on Riemannian geometry (27)(48)

1919 - Hausdorff introduces the notion of the fractional "Hausdorff dimension" (24)

1923 - Bartok composes his "Dance Suite", believed to be inspired by the Fibonacci numbers (11)

1939 - Benford restates the law of distribution of first digits (34)

1939 - The pseudonym Bourbaki is first used by French mathematicians (18)

1960 - Euler's conjecture about the non-existence of certain pairs of Latin squares is disproved by Bose, Parker and Shrikhande (43)

1963 - The Fibonacci Quarterly, a journal devoted to the number theory of the Fibonacci sequence, is founded (11)

1964 - Cohen proves the independence of the continuum hypothesis (18)

1970's - The Chinese remainder theorem is applied to message encryption (15)

1971 - Robert May investigates chaos in the population model (26)

1982 - Maynard Smith publishes Evolution and the Theory of Games (47)

1992 - The International Society for Bayesian Analysis is founded (32)

2004 - David Applegate solves the travelling salesperson problem for all 24,978 cities in Sweden (46)

2004 - The first 10 trillion zeros of Riemann's Hypothesis are verified to be on the critical line. (50)

2007 - Sculptor Peter Randall-Page creates the 70 tonne sculpture "Seed" based on the Fibonacci sequence for the Eden Project in Cornwall, UK (11)