US President Garfield's Proof of the Pythagorean Theorem 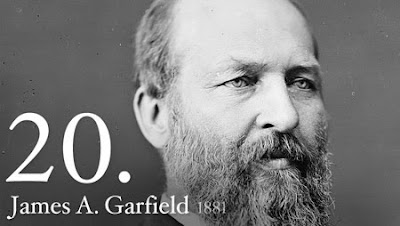 The 20th United States President, James Garfield, came up with a proof of the Pythagorean theorem, while a congressman, thus "proving" at least one exception to Mark Twain's wonderful quote: "First you have your Idiots. Then there's Congressmen. But I repeat myself."

I just found this out toDAY. I found it out by reading Robert Crease's "The Great Equations.", a book I give my strongest recommendation to, especially to my dear and dearest Philosopher friends, Phil Warnell and George Hagel, both of Canada as fate would have it, as Crease is the Department Chair of Philosophy at Stony Brook University.

As George Musser Jr. and Lee Smolin have said, if Physics needs anyone, it's more Philosophers. The reason we need them in Science in General and Physics (greatest of sciences because it is the most fundamental) in particlular, is because Philosophers are THE experts in challenging assumptions. Too much of Science has gone wildcat crazy speculative, and we need more people to reign the wildest ones in, partly because of how whorish Science Writers (other than the best) are; they'll publish any damned fool idea, these days. I mean, it's embarrassing.

The problem is that Philosophers have to raise their Math and Science Knowledge Quotients. Math isn't hard, it just seems this way. Crease knows that, he writes about it. Read, study, and learn. We'll all be better off in the long run.

So anyway, The Pythagorean Theorem's roots are lost in antiquity, but we know the ancient Indians and Chinese knew of it, and the Babylonians knew of it first (so far) as it's on the Plimpton 322 cuneiform tablet, currently on display at Columbia University in NYC.

The COOLEST thing about The Pythagorean Theorem  is that is can be proved in oh so many ways; there are whole books with as many different proofs as the authors can collect, such that Pythagorean proofs, proofs that the square of the length of the hypotenuse of a right triangle is equal to the sum of the squares of the two other sides, are a small Mathematical cottage industry in their own right.

So, here is Garfield's. From this webpage by Angie Head, if you wish to see more. There are many more.

The twentieth president of the United States gave the following proof to the Pythagorean Theorem. He discovered this proog five years before he become President. He hit upon this proof in 1876 during a mathematics discussion with some of the members of Congress. It was later published in the New England Journal of Education.. The proof depends on calcultaing the area of a right trapezoid two different ways. The first way is by using the area formula of a trapezoid and the second is by suming up the areas of the three right triangles that can be constructed in the trapezoid. He used the following trapezoid in developing his proof.

Steven,
If you take two congruent copies of Garfield's trapezoid and put them together to make an (a+b)^2 you get one of the most common textbook proofs in use...
and how did you miss my blog on this and a note of this on April 1,

No, I didn't see that, but thanks! I've only decided to be a (future) Applied Mathematician since September 2010, after completing a one year review of the current State of the Art in Physics, which led to me to the conclusion that there HAS to be something better than uber-speculators who argue a lot in what is nevertheless a VERY fascinating field, and there is!

You're a Geometry and Analysis (Calculus) expert, and I'm just a 54-yr-old boy in comparison, so a lot of things you've known since your undergrad days, is new to me like this one.

Also, it was only in January I found out how important Euler was. before that and thanks to Physics, I was fixated on Gauss (and Galois). I thought HE was the smartest guy, ever. Thanks to continued studying, I realized I was wrong. It was Euler.

Ironically, about a week later Shecky made a comment here, a good one (as Sheckys always do), which led me to check the blogs he liked, which included your Pat's Blog, and that's why we know each other.

So no, I haven't had the TIME to delve into your deep rich weblog as much as I'd like, so I didn't see that. But we have time. I'm just a boy of 54. That's means 20 years before the synapses of my brain start expanding and I drool a lot. Thanks much for the reference, though, you are as you know Sir welcome to comment here any time.

What is Pythagorean Theorem said...

Hi! Nice post. I learn something more challenging on different blogs everyday. It will always be stimulating to read content from other writers and practice a little something from their store.It was much helpful for me to know about What is Pythagorean Theorem and all stuffs related to it .Thanks for this nice blog.